African-origin footballers playing for other countries, especially in Europe, is a familiar scene. But an African-born and raised player playing for Bangladesh? That has never happened before. Well, not yet. And that day is not probably so far away.
Eleta Kingsley (you must have heard the name) could be the very first one.

Just a few years back, he was regarded as a foreigner among the football fraternity. A Nigeria-born forward who scores goals for fun. He has begun a trend and is now a complete Bangladeshi after acquiring the Bangladeshi passport last week and is eligible to play for the Bangladesh national football team.

He had to dismiss his Nigerian citizenship and leave his family behind for – the love of his life, football, and Bangladesh.

The process behind getting the passport was a tough and exhausting one. Eleta had to wait for more than six years to become a ‘proud’ Bangladeshi finally. 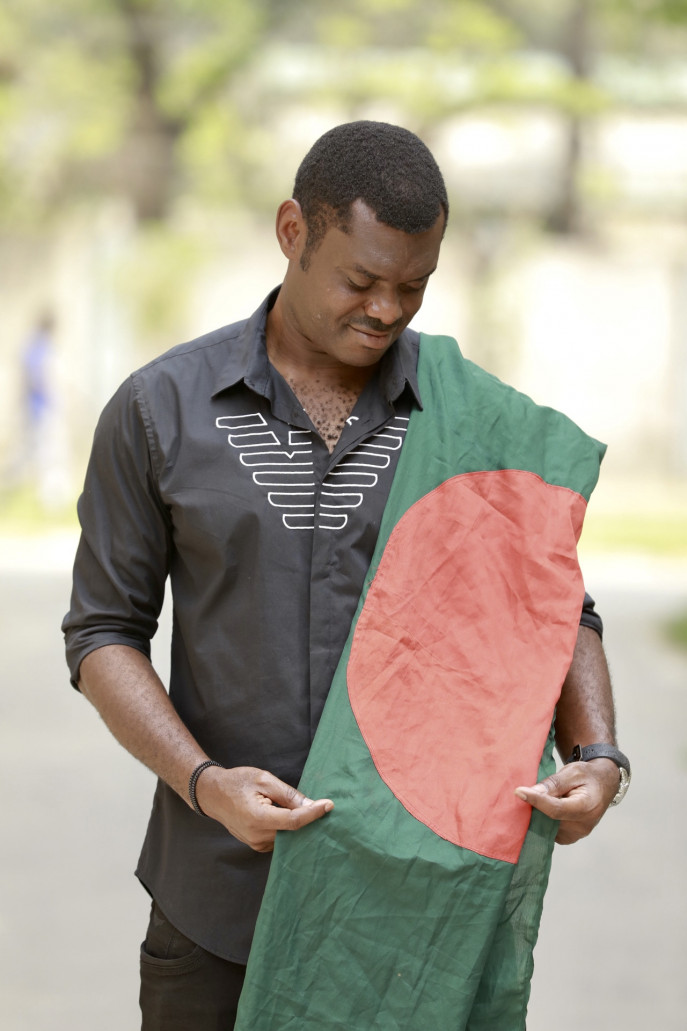 “This, for me, is pride being the first African footballer to be officially associated with the Bangladesh community. As a Bangladeshi, I think it is pride,” Eleta expressed how he felt after getting the passport.

His wife Liza Begum and daughter Eleta Saphira cried out of joy as soon as they got the news.

Eleta understood this was a massive thing for himself and his family. But the amazing reaction he got was beyond his imagination.

“I’m happier now because of the welcoming reaction from the people of Bangladesh. At first, I thought it was a normal thing, but now I see they are more serious than I thought from the beginning, so I think that gives me a different feeling altogether.”

Eleta came to know about Bangladesh back in 2011 when one of his friends who was playing here told him to fly and give a shot. Eleta had to be convinced by his friend, but he is now glad that he decided to come and play football here.

He understandably had a few problems at first. He had to adapt to the weather, the people and everything around him. It’s been over a decade now.

He gradually settled in and settled pretty well.

African players usually dominate our club football. Almost all the teams have a handful of African footballers on their side. A lot of them have come and gone whenever they get a better opportunity. But what made Eleta fall in love with this country so much that he even left the citizenship of his birthplace?

“The gradual development and the infrastructure going on in the country,” Eleta had no hesitation while answering this question.

Eleta is proud to be part of such development, and he thanked the honourable Prime Minister for this.

“When I saw the development and the infrastructure going on in the country, I automatically fell in love with the country because of what the honourable Prime Minister did from the time I came till today. She has done outstanding work in the country, and I’m so proud to be a part of it now.”

Eleta was a bit out of the box when he said the Prime Minister is the unique thing he has seen about Bangladesh. He even mentioned that she is one of the reasons he became a Bangladeshi.

“The Prime Minister. She is the most unique. I have never spoken to her, she doesn’t know me, but she is one of the reasons why I became a Bangladeshi,” he added.

“The Prime Minister. She is the most unique. I have never spoken to her, she doesn’t know me, but she is one of the reasons why I became a Bangladeshi.”

Eleta is thankful to his family, both here and back in Nigeria. They all supported him through this challenging process. He had so many reasons to give up on his dream to become a Bangladeshi, but it was his family that kept him pushing.

“They have played a huge part. They have really shown how good people they are. Especially my wife.

“We had this dream together a long time ago. In between this time, we had a lot of reasons not to pursue this dream; there were many obstacles on the way. But she kept pushing and believing that one day the dream will come true.”

And today, they are celebrating that dream, together.

“I took this decision after thinking a lot, and this is what I wanted. I thank my family (in Nigeria) for their support. When I told them, they supported me,” Eleta added.

The story of Eleta and Liza must come up whenever anyone talks about Eleta’s family.

They met at a restaurant named FFC in Rampura in 2012. Eleta gave a waiter his mobile number to pass to Liza. She called him after a few days. And after a month and a half, they got married. The story sounds so easy, but it was not.

Liza had to fight with her family to marry an African lad. Her son, Farian Arzu and little sister supported her all through.

“I believe I did something good in my past for that I got him in my life. He is great as a human being. Not only to me, but he is also great to everyone,” a happy and proud Liza said.

Liza supports Eleta in football as well. She is always there in the gallery whenever he plays and encourages him to do better through the challenging period.

“I always go to the stadium and support him whenever he plays. And whenever he goes through a bad patch, I try to encourage him, saying he will do better in the coming matches.”

Talking about football, Eleta has a very clear idea of his position and what he needs to do.

He has been hyped mostly for the probability of him playing in the Bangladesh national team, and rightly so.

Like many of the supporters, his daughter Saphira also wants to see Eleta play for the national team.

But Eleta knows this won’t come easily. He, for now, wants to focus on his football. 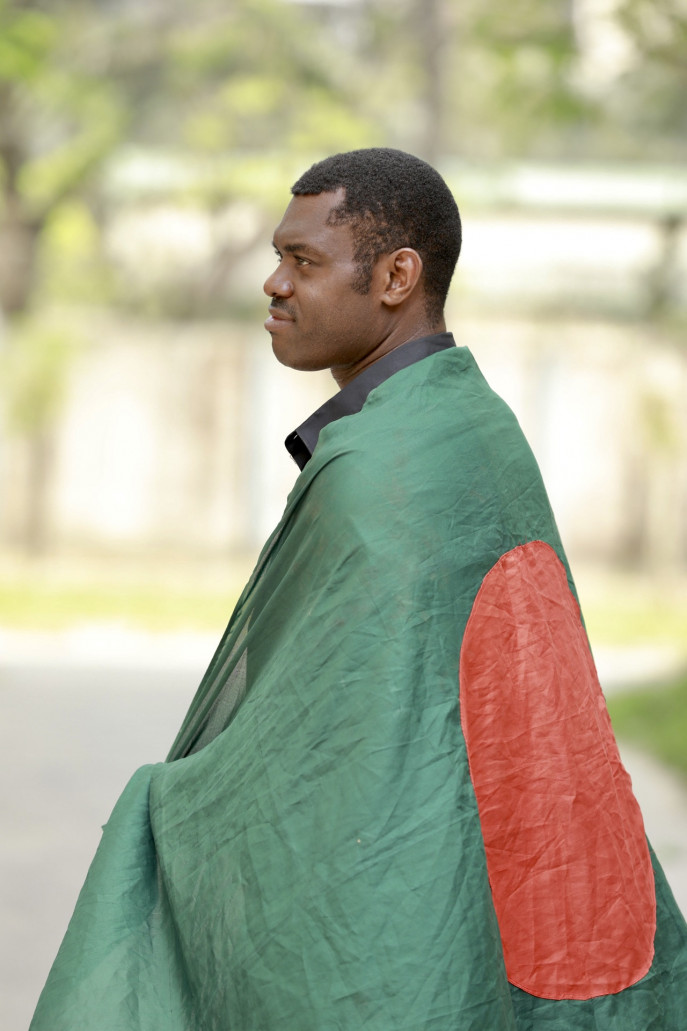 “I know I won’t be an automatic choice. I will need to perform for my club, and the coach will decide the rest,” Eleta isn’t overhyping himself yet.

“I haven’t pictured it (playing for the national team) yet, to be honest. I see many people talking about it, but good things do take time,” Eleta keeping his feet on the ground.

Eleta fears he will still be regarded as a foreigner when he wears the green and red jersey.

It’s a bit sad that he is 31 already and barely has 5-6 years of football in him. But Eleta is confident of giving his best in this short period.

All Eleta wants is to keep playing and win trophies for his side, be it in club football or the national side; the goal remains the same. And he is confident of making a difference wherever he plays.

Eleta signed for Bashundhara Kings recently after recovering from an injury he sustained last year. He hailed the gradual development in club football here but pointed out one lacking that’s holding them from the back.

“Lack of sponsors,” he said.

“There are no sponsors in club football here. And it’s really giving the club owners a lot of challenge to meet up with the standard of the game.”

Eleta understands it’s tough to maintain the balance if the club owners are to run the club from their own pocket, and it is challenging to meet up financially as well.

“They have to go out there and search for sponsors themselves.

When you have a company sponsoring your club, you can then afford to meet the standard of the league.”

He started a business in the garments sector during the lockdown last year, and he plans to continue that besides football.

“This was an excellent thing I achieved during the lockdown. When I saw there was no football and I have to feed my family, I decided to go into business. It paid off. I’m still doing it, and I don’t plan to stop.”

Amidst all the sudden hype and expectation on him, Eleta asked the fans to wait to experience something new.

Eleta has been fighting with adversities all through his life. Settling in here was never an easy job. He remained calm and didn’t allow anything that drew him back. He is well-focused on his goals and ready to give his absolute best. The sooner we accept him as a Bangladeshi, especially on the field, the better.